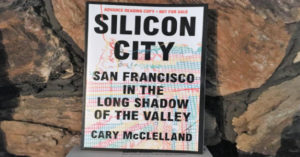 Silicon City: San Francisco in the Long Shadow of the Valley. Book by Cary McClelland, Review

San Francisco is changing at warp speed. Famously home to artists and activists, and known as the birthplace of the Beats, the Black Panthers, and the LGBTQ movement, in recent decades the Bay Area has been reshaped by Silicon Valley, the engine of the new American economy. The richer the region gets, the more unequal and less diverse it becomes, and cracks in the city’s facade—rapid gentrification, an epidemic of evictions, rising crime, atrophied public institutions—have started to show.

Inspired by Studs Terkel’s classic works of oral history, writer and filmmaker Cary McClelland spent several years interviewing people at the epicenter of the recent change, from venture capitalists and coders to politicians and protesters, from native sons and daughters to the city’s newest arrivals. The crisp and vivid stories of Silicon City’s diverse cast capture San Francisco as never before.

The book opens with a longtime tour guide recounting the history of the original Gold Rush and observing how little the people of his city pay attention to its history; it ends on Fisherman’s Wharf, with the proprietor of an arcade game museum reminding us that even today’s technology will become relics of the past.

In between, we hear from people who have passed through Apple, Google, eBay, Intel, and the other big tech companies of our time. And we meet those who are experiencing the changes at the grassroots level: a homeless advocate in Haight-Ashbury, an Oakland rapper, a pawnbroker in the Mission, a man who helped dismantle and rebuild the Bay Bridge, and a woman who runs a tattoo parlor in the Castro.

Silicon City masterfully weaves together a candid conversation across a divided community to create a dynamic portrait of a beloved city—and a cautionary tale for the entire country.

Cary McClelland is a writer, filmmaker, lawyer, and rights advocate whose work has taken him around the world. He met his wife in San Francisco, where they settled down and built their first home. They now live in Brooklyn with their son.

Appearance:
I have received the “review version” of the book, I like the cover design and, the quality of Paper and printing is great.

Content:
I have had the privilege of reading Silicon City Book and share my review with its author and its Audience, I won this Book through the Goodreads Review Program and never been notified as a lucky winner.

Silicon City, or Silicon Valley, Technology, American Economy, Geniuses, Inventors, Investors, etc it’s what poped-up in my mind when I first read the title (eye-catching), Well I read it and I’ll be more than happy to share my review with all of you here on 3ee.info a great book review source in the US Book Market as well as on social media.

Silicon City: San Francisco in the Long Shadow of the Valley, is written in the Story-Telling Technique of writing about the technology, the US history, Americans, Immigrants, and Giant companies in the different industry such as Apple, Facebook or Intel and etc. Cary McClelland the author of the book, successfully written this story, by using his talent in filmmaking and writing provided an interesting book.

After the great recession in 2008 San Francisco and San Jose became the two wealthiest cities in the nation, while they attract more educated and investors from all around the world, many believe the region is the engine of the new American economy and the problem is that The richer the cities get, the more unequal they become.

So now you know what this book is all about, and maybe you think the bottom line is predictable, but the Author very professionally explained his point of view and described the situation which Silicon Valley is in. this book is not just about a specific area but about the American history as well, about many emigrants who came to this country and faced a lot of problems to study to become a part of this nation’s economy.

I absolutely give a pure 5-star review to this awesome book not just because I loved the title but I believe the older this book gets the more valuable it becomes.

I highly recommend it to whoever is enthusiastic about: America’s History, Economy, Technology, Innovation, etc.

If you also have read this book, please comment your review below, we greatly appreciate your comment and let’s talk about it!