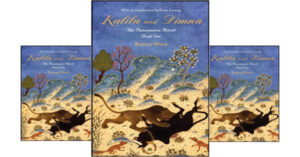 Kalila and Dimna – The Panchatantra Retold by Ramsay Wood, Review

Once upon a time, a powerful young king called Dabschelim ruled over India. One day he came upon a hidden treasure from a long-dead king. With it was a letter addressed to him. How had the letter come to be there? And what did it mean?

To solve the mystery, Dabschelim summoned the wisest man in his kingdom, Dr. Bidpai, to his side. And so began the tales of Kalila and Dimna… In all the storytelling collections from India, it is the secular animal fables found in The Panchatantra and its Buddhist inspiration, The Jataka Tales, that have traveled the furthest and influenced world literature the most.

These stories spawned equally famous classics in both Arabic and Persian – indeed the oldest surviving manuscript of The Pancatantra stories is Kalila and Dimna, an Arabic derivative of the lost Sanskrit original. From the Persian and Arab world, these fables migrated to Europe and by the 16th century existed in Spanish, Hebrew, Greek, Latin, Italian, French and English versions. Even Aesop includes a few in his famous collection.

Ramsay Wood’s delightful retelling of The Pancatantra not only modernizes the ancient fables but uses all the main versions from the Sanskrit to the Persian and Arabic and even the early English. Written with great color, style and panache, and beautifully illustrated, it makes the perfect introduction to a global Indian classic.

I haven’t read this Book yet, but if you already read this book, please share your thoughts with us.

some of our reviews: