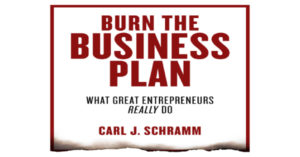 “Burn the Business Plan” What Great Entrepreneurs Really Do by Carl J. Schramm, explains that the importance of a business plan is only one of the many misconceptions about starting a company. Another is the myth of the kid genius—that all entrepreneurs are young software prodigies. In fact, the average entrepreneur is thirty-nine years old and has worked in corporate America for at least a decade.

Burn the Business Plan tells stories of successful entrepreneurs in a variety of fields. It shows how knowledge, passion, determination, and a willingness to experiment and innovate are vastly more important than financial skill.

Business startup advice from the former president of the Ewing Marion Kaufmann Foundation and co-founder of Global Entrepreneurship Week and Startup America, this “thoughtful study of ‘how businesses really start, grow and prosper’…dispels quite a few business myths along the way” (Publishers Weekly).

Carl Schramm, the man described by The Economist as “The Evangelist of Entrepreneurship,” has written a myth-busting guide packed with tools and techniques to help you get your big idea off the ground. Schramm believes that entrepreneurship has been misrepresented by the media, business books, university programs, and MBA courses. For example, despite the emphasis on the business plan in most business schools, some of the most successful companies in history—Apple, Microsoft, Google, Facebook, and hundreds of others—achieved success before they ever had a business plan.

Burn the Business Plan punctures the myth of the cool, tech-savvy twenty-something entrepreneur with nothing to lose and venture capital to burn. In fact, most people who start businesses are juggling careers and mortgages just like you. The average entrepreneur is actually thirty-nine years old, and the success rate of entrepreneurs over forty is five times higher than that of those under age thirty. Entrepreneurs who come out of the corporate world often have discovered a need for a product or service and have valuable contacts to help them get started.

Filled with stories of successful entrepreneurs who drew on real-life experience rather than academic coursework, Burn the Business Plan is the guide to starting and running a business that will actually work for the rest of us.

“Mercifully free of Silicon Valley fairy tales. Schramm is interested in real people starting real companies: Readers will find most of his cases gratifyingly unfamiliar and generally relatable. Burn is a solid roundup of the current best thinking on startups, guiding new entrepreneurs in both introspection and execution.”

“This business book lives up to its billing. . . . [Schramm] sets forth in real, practical, down-to-earth ways his knowledge of everything from debunking myths to identifying actions for success.”

“New businesses are about great ideas, not great plans. Schramm tells it as it really happens.”
(Mitch Lowe, co-founder of Netflix, founder of MoviePass)

“Required reading for those who want to learn the real entrepreneurial process.  It obliterates the useless conventional wisdom urged upon aspiring entrepreneurs of writing business plans and focusing on venture capital.  This book, filled with stories of entrepreneurs just like you, is for the 99 percent of people who dream of starting a business but can’t find a practical roadmap.”

“Business professors, many of whom never started a business, may hate this book because it overturns their view that writing a business plan is the key to success.  Instead, this is a book filled with plain-spoken practical advice from one of the country’s most thoughtful experts on entrepreneurship who is both a scholar and successful entrepreneur.”

Carl J. Schramm is a University Professor at Syracuse University and former president of the Ewing Marion Kauffman Foundation. Schramm has served in major corporate roles and chaired the US Department of Commerce’s Measuring Innovation in the Twenty-First Century Economy Advisory Committee. He was also a member of the President’s National Advisory Council on Innovation and Entrepreneurship. Schramm splits his time between upstate New York and Florida. Visit CarlSchramm.com.

Appearance: I borrowed the hardcover of this book from Akron Library, I don’t like the paper quality but the printing is fine.

Burn The Business Plan (in spite of the title) is full of instructional histories of many brands and businesses that probably we’re dealing with or hearing from on daily bases like Heinz ketchup, Apple products, etc. the author described each history and the biography of those entrepreneurs behind their successful brands.

The author missed an important part of the history of Amy Upchurch:

Every entrepreneur you’ll meet in this book, with one exception, worked for an established company before starting his own. Like the founders of BrandYourself, Amy Upchurch had never worked for a company. Her personal experiences, her drive to help others in like circumstances, and her tenacity, made her into an entrepreneur.

When Upchurch was pregnant with her first child, she suffered debilitating bouts of morning sickness… he explains about her four pregnancies and the stomach pain which nearly a dozen doctors all around the world couldn’t figure out what is that and why pregnant women should suffer from that, then she had learned that morning sickness most often is caused by a stomach bacteria, Helicobacter pylori, which ended up a great business idea for her.

I found chapter 10 Planning for Success, very helpful. just as examples you will find start-up strategy, and the importance of strategic planning in an entrepreneurial context or “inherent” knowledge, sometimes “the knowledge in your hands and head,” which is learned only by experience.

I personally don’t believe if Luck has any rule in today’s success but Author on page 211 says While there is no disputing the apparent role of luck in the success of many startups,… then on page 212 says whether your startup is successful depends on your ability to learn by doing and to understand the dynamic situation in which you have placed yourself, where every decision counts.

By reading my review don’t think I don’t recommend this book, but this one will be one those books that I have to have in my collections one day. I’ll buy it when I’m in a better financial shape.

I’d like to thank Summit County Library for providing books to me, I’ll make it up one day.

Did You Know: (Book Articles):

One of the headwinds that challenge a fact-based discussion of successful entrepreneurship is the looming presence of a handful of wildly successful high-tech innovators. The icons are, of course, the household names: Bill Gates, Steve Jobs, and Mark Zuckerberg, the myth-making college dropouts who became billionaires before thirty.

While their stories make fascinating reading, and we owe them immeasurable gratitude for their revolutionary contributions, their narratives hold very few actionable lessons for the more than ninety-five percent of entrepreneurs who want to start a construction business, manufacture innovative building materials, become a service provider, or develop a franchise. These are the people more like you and me, from all walks of life, who want to start businesses.

In fact, the romanticized narrative of the young, mostly male, high-tech wizard accounts for the smallest constellation in the universe of entrepreneurs—only about five to seven percent. Their new businesses get almost all the high-profile investment by venture capital firms, most of the media coverage, and—here’s a surprise—experience the highest failure rate of business startups. About eight in ten disappear within five years.

The real story on startups and their success rates reveal something very different. Most entrepreneurs never went to college, and most did not start their companies until they were well along in their careers. The average entrepreneur is nearly forty years old when he launches, and more than eighty percent of all new companies are started by people over thirty-five. More entrepreneurs are between forty-five and fifty-five than any other cohort, and entrepreneurs over fifty-five now create more companies than those under thirty-five.

In fact, most entrepreneurs are “replicative,” that is, they take an existing product or idea and make it better. This is what Howard Head and James Dyson did. This process of incremental or iterative improvement is the basis of almost all innovation. Innovation proceeds in phases; inventors take what exists and create accretive combinations. Often an innovation comes down to having brought existing things together in a way never before seen. Dozens of search-engine startups existed before Google. The company copied others, becoming successful by analyzing individual searches for patterns that could be sold to advertisers.

The notion of emulating others’ ideas seems foreign to many people when they think about entrepreneurs and startups. This reaction is heavily influenced by the mythology of Silicon Valley—that every entrepreneur must invent a distinct, totally original, technology.

No invention, however, stands apart from history. This reality is nowhere more clearly demonstrated than by examining patents issued by the federal government for new products. As a condition of government recognizing an idea as intellectual property, thus granting the patent holder the exclusive right to commercially develop the idea for twenty years, it must be made public.

Success among the franchisees of already strong brands is more likely for a variety of reasons. Entrepreneurs who become franchisees—generally called “operators” in the franchise world—are older and more experienced than other entrepreneurs. The average age of a franchise buyer is forty-six; only about ten percent of new operators are under thirty-five, and nearly ten percent are over sixty-five. Overwhelmingly, franchise buyers have significant employment or business histories, and most have built up savings and other assets.

To purchase a strong brand, however, having sufficient financial means is not enough. Most established franchisors screen applicants very carefully; in addition to in-depth and detailed financial background checks, their due diligence may include interviews with friends, neighbors, and family members, and some require that applicants undergo psychological testing. Obviously, these franchisors need to feel confident about an applicant’s level of commitment and fit within their business model and to know whether the applicant will be a worthy representative of the brand that the franchisor works so hard to maintain and improve. Successful franchising companies pride themselves on their careful selection processes and how successful their operators become.

If you also have read this book, please share your review below, we greatly appreciate your comment and let’s talk about it!