Skip to content
Home » God An Autobiography as told to a philosopher by Jerry L. Martin 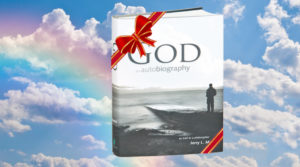 God An Autobiography as told to a philosopher by Jerry L. Martin

The voice announced, “I am God.” For Jerry Martin, that encounter began a personal, intellectual, and spiritual adventure. He had not believed in God. He was a philosopher, trained to be skeptical— to doubt everything. So his first question was:

Is this really God talking?

There were other urgent questions: What will my wife think?

Why would God want to talk to me?

Does God want me to do something?

He began asking all the questions about life and death and the ultimate things to which he—and all of us—have sought answers: Love and loss. Happiness and suffering. Good and evil. Death and the afterlife. The world’s religions.

The ways God communicates with us. How to live in harmony with God. God: An Autobiography tells the story of these mind-opening conversations with God.

“An atheist philosopher finds himself in a surprising series of conversations with God. One of the two main characters in Martin’s debut is the author himself, whose own Christian faith didn’t survive even a rudimentary college philosophy class,” where arguments for the existence of God were shot down like clay pigeons.

“The secular philosopher opens his book with a quick account of falling in love with the woman who would become his wife, but the focus shifts almost immediately to a mysterious voice he begins sensing, identifying itself as “the God of all” and heard only by Martin. After a good deal of initial doubts, he decides to embrace the experience, even though at first it resembles “a training in obedience,” with the voice ordering him around on trivial matters seemingly at random. But gradually, larger issues and disclosures begin to surface.

And Martin shares a great many of these revelations in immensely readable prose that’s reverential but completely accessible to nonbelievers. His portrait of God is a remarkable dramatic construct, a vastly enigmatic being seized with an urge to unveil Himself in detail. This is a God who dwelled for unbounded ages in a formless void before existence began and He started to evolve along with it, shaping space and matter toward His eventual relationship with humankind, a process of creating Himself.

Martin’s version of God is often every bit as argumentative and contradictory as the one found in the Bible, but this volume’s narration helps smooth things over: it’s easily literate (quotes from many authors abound) and excellent at clarifying the deep philosophical subjects covered as the dialogue progresses. Martin’s deity talks about being part of non-Christian texts like the Upanishads and the Mahabharata (and even discusses the “rebel” pharaoh Akhenaten), but nevertheless, this book chronicles one man’s encounter with the God of the Judeo-Christian tradition. Yet as such, it’s a revelation. A captivating religious dialogue for the modern age.”

Kirkus Reviews For those of us who like to think about topics in the philosophy of religion, what is more intellectually fertile than rich theological speculation? After reading Jerry Martin’s God: An Autobiography, as Told to a Philosopher, the answer is now clear: a continuous self-disclosure on the part of the divine to a former agnostic with philosophical training. Martin is not only acutely sensitive to the implications of what is being revealed, but he also demonstrates a knack for asking just the right questions.

And this is precisely what makes God: An Autobiography such a profoundly satisfying read, regardless of whether or not the reader believes that the voice of God is truly the book’s co-author, or that the entire conversation is a product of Martin’s vibrant and cultivated inner life.

One thing we are treated to in God: An Autobiography is a unique and expansive introduction to the world’s religions on par with the best courses on the topic–I know this because I have been teaching this subject for almost twenty years. By the time one is three-quarters through the book, classical Chinese thought, Zoroaster, biblical Judaism, the Upanishads, the Mahabharata, Buddhism, and Jesus have all made their appearances.

The fresh and insightful take on each of the above is itself a good reason to read God: An Autobiography. Included here is an intriguing justification of reincarnation, an interpretation of the Hindu notion of the Atman or deeper part of the soul, a powerful view of the significance of Jesus, and much else. But this is no bland affirmation of every spiritual inclination, for at times the revelations are outright provocative.

Among other things, Martin’s divine Interlocutor offers a flat rejection of the Buddhist concept of sunyata, or the void, and a compelling critique of the more cosmetic and otherworldly tones of Vedanta thought. Just when the reader thinks their mind has been stretched toward its far limit in regards to religious ideas, the book opens toward broader cosmological and eschatological matters.

Here we find a consciousness-expanding and even hallucinatory account of a multiplicity of different worlds, of the connection between our temporal and finite experience with the possibility of spiritual fulfillment, of the relationship between the personal and volitional deity of revelation with the “God beyond God,” and far more than I can effectively summarize. After finishing these chapters I had so many thoughts and questions in my head I couldn’t even jot them all down. I will not attempt to summarize the treasures found in these pages, but will only beckon the readers to enter and see for themselves.

I will state however that there is much in this book that may transform how we discuss the most intractable theological conundrums. Chief among these is the age-old problem of “theodicy,” or the quest to reconcile the existence of God in the face of evil, along with the questions of religious pluralism and competing revelations. Each reader may very well discover an answer to a puzzle fueling much of their life and thought.

For my own part, this is the tension between a contemplative and mystical mode of the spiritual life, one of a descent into the depths of the psyche or ground of the soul, with the more rigorously world-engaging and ethical one. In a nutshell, no matter what one believes concerning the source of the revelations in God: An Autobiography, as Told to a Philosopher, Martin has delivered us the most path-breaking material for future philosophical and theological reflection have come across in a long time. I simply cannot recommend this stunning book enough.

Jerry L. Martin was raised in a Christian home. By the time he left college, he was not a believer. But he was interested in the big questions and so he studied the great thinkers. He became a philosophy professor and served as head of the philosophy department at the University of Colorado at Boulder and of the National Endowment for the Humanities.

In addition to scholarly articles on epistemology, the philosophy of mind, and public policy, he wrote reports on education that received national attention and were invited to testify before Congress. He stepped down from that career to write this book. Martin lives in Pennsylvania and is married to Abigail L. Rosenthal, professor emerita at Brooklyn College of the City University of New York.