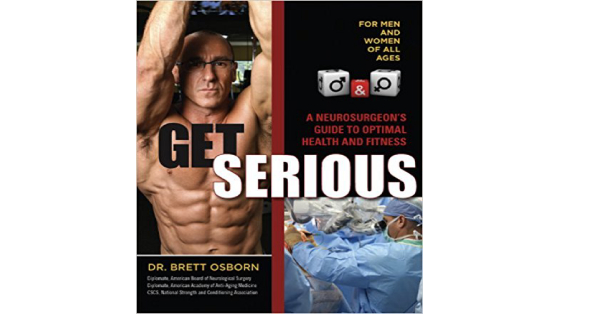 Brett Osborn is a board-certified Neurological Surgeon with a secondary certification in Anti-Aging and Regenerative Medicine. 30+ years of exercise experience and a CSCS honorarium from the National Strength and Conditioning Association, in conjunction with his medical background, have afforded him the knowledge and expertise which he shares with the reader in Get Serious.

Get Serious Book, first printed in 2014, and in order to write a professional review I had to reread it again, which was worth it and I’m glad to have this amazing book in my collection.

The Appearance:
I didn’t like the cover design, but this book has a great quality of the paper and color printing.

Content:
In this book, you will learn about the multitude of disease risk factors such as insulin resistance, dyslipidemia, obesity, hypertension (cumulatively known as Metabolic Syndrome), hormonal imbalance, and the role of chronic inflammation in the genesis of disease.

Dr. Osborn described aging as a disease and he says It is the disease of aging. You may be thinking, “aging is not a disease.” Well, if it’s not, why does this non-disease kill 100,000 people per day? that’s really interesting to me and maybe it’s new to you too but remember he’s Anti-Aging Medicine Doctor.

This book also included a lot of information about Cancers, DNA, and as he said: The goal of this book is to educate you the consumer, the patient, and allow you to assume care of your own health. but it has been written with a lot of specific and Medical Scientific vocabulary which made it difficult to understand.

I also have learned about type 3 diabetes which is Alzheimer’s disease, and how to prevent diabetes. this book has 11 chapters and the chapter 8th which is about supplements is the most informative part as I’ve read other reader’s reviews on different websites.

There is money in disease, not health.

IT’S ALL ABOUT TESTOSTERONE but how? which supplement?
Doctor Osborn in this book explains many of the daily problems that we all are dealing with, he wrote that one of the reasons that we cannot build muscle is the low level of TESTOSTERONE.

he explains the natural way to increase your TESTOSTERONE is resistance training like the five basic compound movements:
Squat, Bench press, Deadlift, Overhead press and a chin/pull-up or rowing movement.

one the hardest workout that probably many of us are skipping, is squats and One of the greatest benefits of squat is increasing testosterone level in our body. Dr.Osborn explains each exercise with the correct way of performing.

He explains about TRT and HRT and how sugar is aging us: Consumption of refined sugars not only fosters the genesis of free radicals but also fuels the fire of inflammation. And chronic exposure to excess free radicals (oxidation) and inflammation causes age-related disease, period.

Overall I personally give 4 stars to this book but I still believe if a book teaches me something new, it deserves a 5-star review.

–This is NOT the next diet book.

I don’t believe in diets. In fact, there is no such thing as a diet. Well-fit individuals were around eons before the word “diet” even existed. In fact, by default—that is, without our own self-destructive behaviors (poor diet and a sedentary lifestyle) the human body is lean muscle. We GROW fat (and fatter) by virtue of our poor lifestyle choices.

Despite the obvious challenges, it was almost easier to stay healthy in Paleolithic times because there was less “interference.” There were no supermarkets filled with synthetic, chemically-laden foods. You were hungry, you killed your food, and you picked your fruit and vegetables.

And these weren’t laced with estrogenic and potentially carcinogenic pesticides. Now it’s much more difficult—health takes work. Requisite to your attainment of health is knowledge. While there is some genetic predisposition to gain weight, especially when eating sugars and starches (so-called “carbohydrate intolerance”), you are not destined to be fat. So stop blaming your parents.

Genetic predispositions can be overcome with diligent adherence to sound nutrition principles. These concepts must be understood in depth and at the outset. Education and the resultant knowledge is a prerequisite for execution. Haphazard dieting (there, I said it) in the absence of understanding, will always fail in the long run.

Why do I say this? Because sound nutrition (and maintaining a healthy body weight) is simply stroking the biochemical processes which are the foundations of our existence as humans. Provide the proper nutrients to your biochemistry (which may be slightly different than mine, due to subtle genetic variation) and attain optimal health. You are a reservoir of biochemical processes, an unbelievably complex machine, albeit with a high degree of predictability.

Our bodies, for the most part, act according to a set of rules that evolved over eons as an adaptive response to environmental pressures. Health is attained through sound biochemistry. The absence of health (disease) is biochemical dysregulation. In other words, we start off healthy and we screw it up!

A word to the reader: This chapter is NOT filled with recipes and a meal plan, like most diet books are. It is, instead, filled with information that I think will not only save your life but give you a good understanding of food and how it works in your body. More understanding, less memorizing.

That way, real-world applications become thoughtless, almost instinctive. You’ll make the right food choices without thinking. My main concern (and it should be your main concern too) is the epidemic of obesity and diabetes in the world, primarily caused by poor diet and lack of activity.

Type II diabetes, in particular, is triggered by excess sugary foods that continually require our bodies to produce more and more of the hormone insulin until we ultimately become resistant to its effects, or “insulin resistant.” That means our systems are so flooded with this hormone that our cells become immune to its actions, leaving us with high levels of circulating sugar.

The excess glucose not only harms our tissues and organs (especially the heart and its feeder arteries), but turns into fat, and turns our bodies into mush instead of muscles. This is the perfect set-up for inflammation which, as I discussed earlier, is at the core of all disease. Sugar is not the only problem. We consume vast amounts of bad fat which adds fuel to the fire. (Not all fat is equal, which I will explain later.)

And we consume too little protein which is essential for building muscle. Remember, your heart is a muscle too. It—and the arteries that deliver blood to your heart and, ultimately, your body—is especially vulnerable to the toxic effect of high sugar loads and inflammation. Heart disease is still the number one killer of both men and women, so this point is very important. My goal here is to outline the foundational tenets of nutrition and to present to you the science that will allow you to design your own “diet,” one that puts you closer to your fitness goals.

Most of you long to shed fat off your waistline. It’s really much easier than you have been led to believe. The right food, combined with the right exercise, will get you optimal health and the body you want. First, you need to understand the basics. As neurosurgeons say to one another, “it’s not rocket science.” Once you learn all there is to learn, you will see that it’s really a common sense approach. You will then be able to make smarter food choices without having to follow a rigid diet.

–Insulin Ups and Down

First, there is less insulin secreted by the pancreas in response to a lower instant-to-instant serum glucose level. Functioning optimally, the pancreas maintains tight control of serum glucose. Blood sugar typically rises to levels < 140 mg/dL and returns to baseline within three hours of a meal (barring a diabetic or insulin-resistant state).

In contrast, the pancreas is stressed when exposed to high levels of serum glucose, having to “chase after” the massive sugar attack from the gut. Invariably, insulin levels soar, often overshooting its demand. Therefore, one hour after eating, serum glucose is markedly elevated, as is the level of serum insulin.

This occurs even in the context of normal insulin sensitivity, at least until this complex homeostatic mechanism becomes dysregulated, by virtue of chronic bodily exposure to high serum glucose and lack of exercise. You see, high serum glucose in addition to inducing insulin resistance or IR, is toxic to the endothelium, because it promotes the formation of “advanced glycation end-products” or AGEs discussed earlier.

Glycation is the binding of a glucose molecule to a protein molecule, resulting in the formation of damaged protein structures. Many age-related diseases such as arterial stiffening, cataracts, and potentially Alzheimer’s disease, are related to glycation. Cellular accumulation of AGE’s induces the production of inflammatory cytokines, which is not good. When you are “over-inflamed,” you need to quench the fire. As a neurosurgeon, I use corticosteroids (powerful anti-inflammatory medicines) fairly aggressively, particularly during the management of a patient with a brain tumor.

Having been administered steroids, patients will often report dramatic improvement in not only their headaches but in their neck and back pain. Why? Because the root of degenerative spine disease, “arthritis,” is inflammation. Treat the inflammation and the pain improves. Similarly, in the diabetic patient, strategies geared toward diminishing bodily inflammation must be in place. Of course, that is initiated with tight glycemic control.

You may have heard of the glycemic index (GI) before—it’s a way of rating the impact that food has on blood sugar and insulin. In medical terms, GI is defined as the increase in blood glucose level over the baseline level during a two-hour period following the consumption of a defined amount of carbohydrate compared with the same amount of carbohydrate in a reference food.

Glucose serving as the reference food has an arbitrarily assigned GI of 100. For the sake of comparison, kidney beans have a glycemic index of 23, peanuts 7, and white rice 89. Simply put, the sweeter the food, the higher the glycemic index or GI value.

There are many other contributing factors such as bodily stress (which may be work related or due to sleep deprivation). These will be discussed elsewhere. Why am I telling you this? Haven’t myriads of diet books stressed the importance of low glycemic index foods in one’s quest to lose weight?

You’ve probably heard it all before, right? Wrong. Yes, low glycemic index carbohydrate consumption facilitates weight loss, but eating your daily vegetables has far greater, life-extending effects. As post-prandial glucose increases only mildly in response to low GI foods, there is less insulin secreted. As insulin is atherogenic and frankly toxic to the endothelium, lesser circulating insulin (at any given instant in time) has been correlated with vascular health.

And get this, glycemic fluctuations even within the so-called “normal” range in healthy volunteers induce physiologically significant effects on endothelial function, oxidative stress, and immune activation. Even in the non-diabetic population, post-meal elevations of plasma glucose exert deleterious effects on the vascular system. I suspect by now you’re reconsidering that ice cream sundae! After all, you are likely to die of the effects of atherosclerotic disease or “hardening of the arteries,” statistically speaking.

Have you read Get Serious Book? What have you learned from this book! comment below!

3 thoughts on “Get Serious Review”